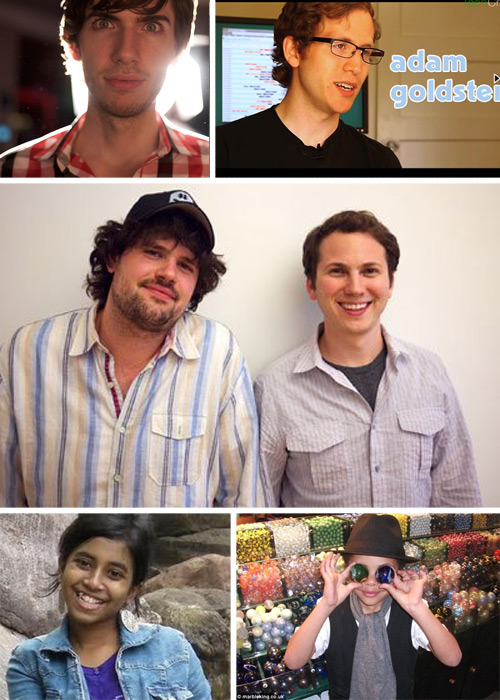 World’s Top Youngest CEOs: What does it take to be the World’s Youngest CEO? Marbles, apparently. A lot of marbles. At the age of 8, British “Marble King” Harli Jordean has recently been dubbed the World’s Youngest CEO, stripping 14 year-old Indian animation queen Sindhuja Rajaraman of her title. No joke, folks: The two youngest CEOs this year aren’t even old enough to have their driver’s licenses. But all CEOs have their own personal drivers anyway, right? With an almost 10-year gap separating the young guns from the younger guns, the other three entrepreneurs on our Top 5 Youngest CEOs list each come in under the age of 30.

8 year-old Harli Jordean “has been obsessed with marbles ever since he was six,” according to his mother, Tina. Amazingly, this little nugget had a hobby for two years and is now the World’s Youngest CEO. Is anyone else out there starting to rethink career choices? After accruing a notable collection of marbles and later becoming frustrated by the lack of selection online, Harli and his family developed their business  (which revolves around the whimsical “Land of Marbles, where everybody has Marble MANIA”), and are now selling specialty marbles for up to $1,000 US dollars. According to Marble King’s website, Harli, who is the fedora-clad face of the company, aspires to one day “become an active co-owner and to actively take his throne, to take the leadership in running the business.” So essentially, this kid gets to live large by playing with marbles all day until he’s old enough to start balancing the books. Or old enough to hire someone to do that for him.

Coming in at a close second is 14 year-old Sindhuja Rajaraman, who is the CEO of Seppan, a successful animation company in Chennai, India. Despite being bumped from the top spot on this list earlier this year by Harli Jordean, Sindhuja still remains the youngest CEO recognized by the National Association of Software and Service Companies. And all of Seppan’s success has stemmed from yet another child with a hobby. “It all started five years back when I wanted to take my mind off studies and do something new,” she says. She credits her father, a cartoonist, as her inspiration – He taught her the art of animation that has propelled her into short-film creation. Yet despite spending the majority of her day in the Seppan offices, Sindhuja claims to be raking in a smaller salary than any of the other 10 employees. Perhaps the only CEO who is paid less than the employees, she notes. But don’t get it twisted: she still wants to play with friends and go to film school and stuff. She just has to prioritize a little (a lot) differently than the average teenage girl.

With nearly a decade between the ages of numbers two and three on our list, Adam Goldstein is still far from old (and just as close to the possibility of retirement) at the ripe old age of 23.  As the CEO of Hipmunk, a travel start-up with an adorable and aeronautically adorned chipmunk mascot, Goldstein and co. are giving better-known travel search engines like Kayak and Orbitz a run for their money.  Hipmunk “takes the agony out of flight search,” and shows users their best bet via one of the most visually appealing timeline interfaces on the web. They rank flights not only based on lowest price, but on the overall “agony” of the trip, which includes travel time and total stops. It also supports both city names and airport codes, and inserts train travel options, which are often time the cheapest (albeit longest) way to go – You know, for those of us who just can’t seem to plan ahead.

GroupMe’s Jared Hecht slides in at number four, hot on the heels of Goldstein at age 24.  Hecht’s company, which was recently acquired by Skype (for $85 million a year, no less), is, at the most basic level, seamless group text messaging. When faced with the difficultly of rallying the troops at the ever-cellularly-elusive music festival, Hecht and his partner Steve Martocci conceived a text service akin to group email chains. Every group receives a unique phone number upon sign-up, and each text sent by a member of said group is broadcasted to everyone on the chain. Thanks to GroupMe, at least one of your friends is bound to meet you at the port-a-pottys after the Cut Copy set.

Tumblr’s David Karp brings up the rear of our list at 25 years old, barely edging out  Globals Incs.’s Suhas Gopinath, who took the top spot last year. According to the NY Observer, “Mr. Karp is tall and skinny, with unflinching blue eyes and a mop of brown hair. He speaks incredibly fast and in complete paragraphs.” But sorry ladies, he’s got a girlfriend that pretty much meets this same description. Karp started Tumblr, a short-form blogging platform, to create something  “much more free-free, much less verbose” than typical blogs. Basically, if you don’t like to write but still want to create a home for our online personality (that isn’t the increasingly-invasive FaceBook), Tumblr makes it easy for you. High expression, low commitment. Just how we like ‘em these days.

I am Amit, I am software engineer with 10 Years of experience. I am a blogger and affiliate marketer.

View all posts by Amit Kumar →

How to Install WordPress?

How to Create a Bootable Windows 7 USB or Vista USB Drive ?

How to Add Multimedia to WordPress Posts ?